Drawing on TEAC’s proud heritage in creating world-class tape decks, the W-1200 is a best-in-class dual cassette deck for the modern age. 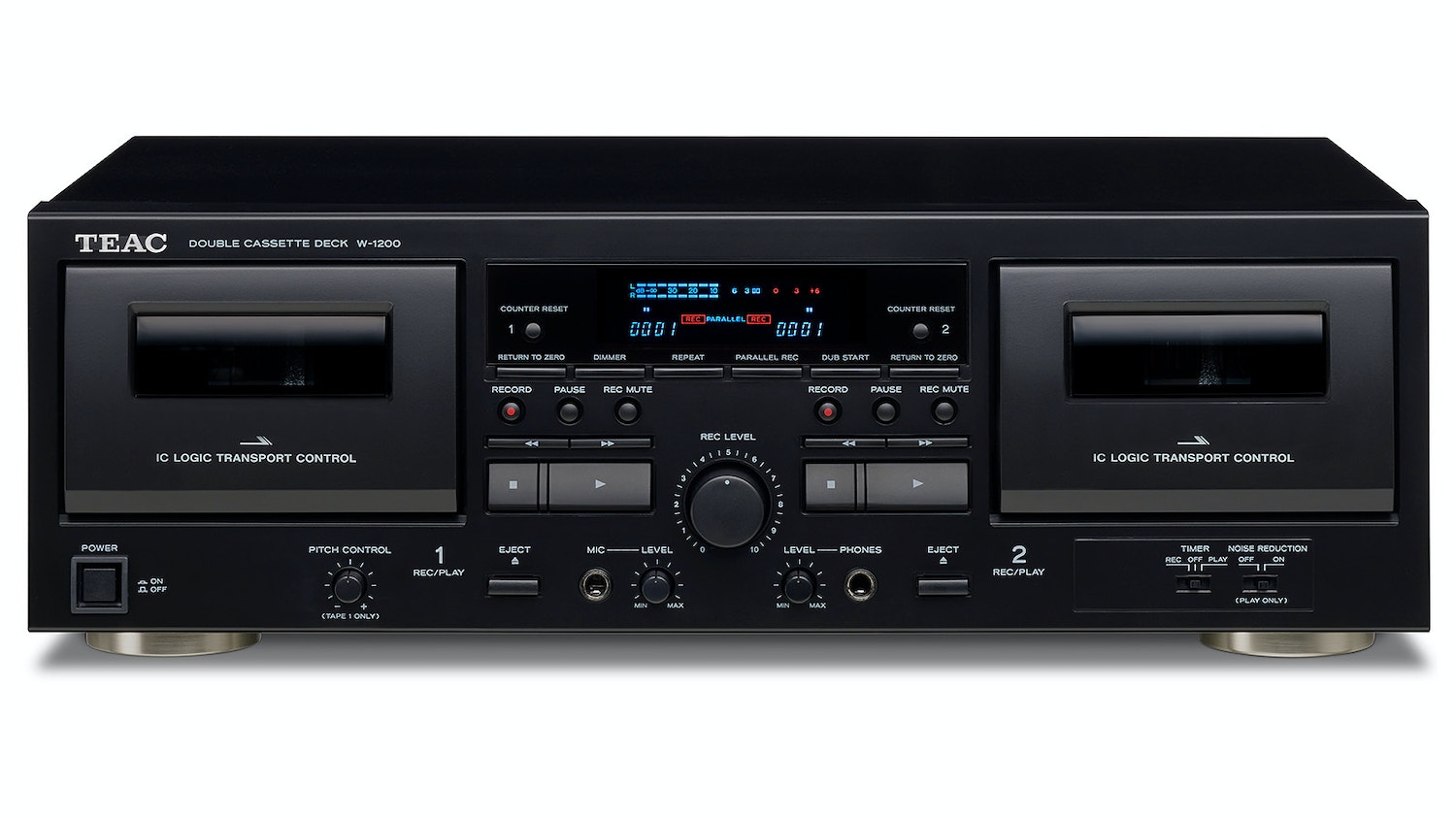 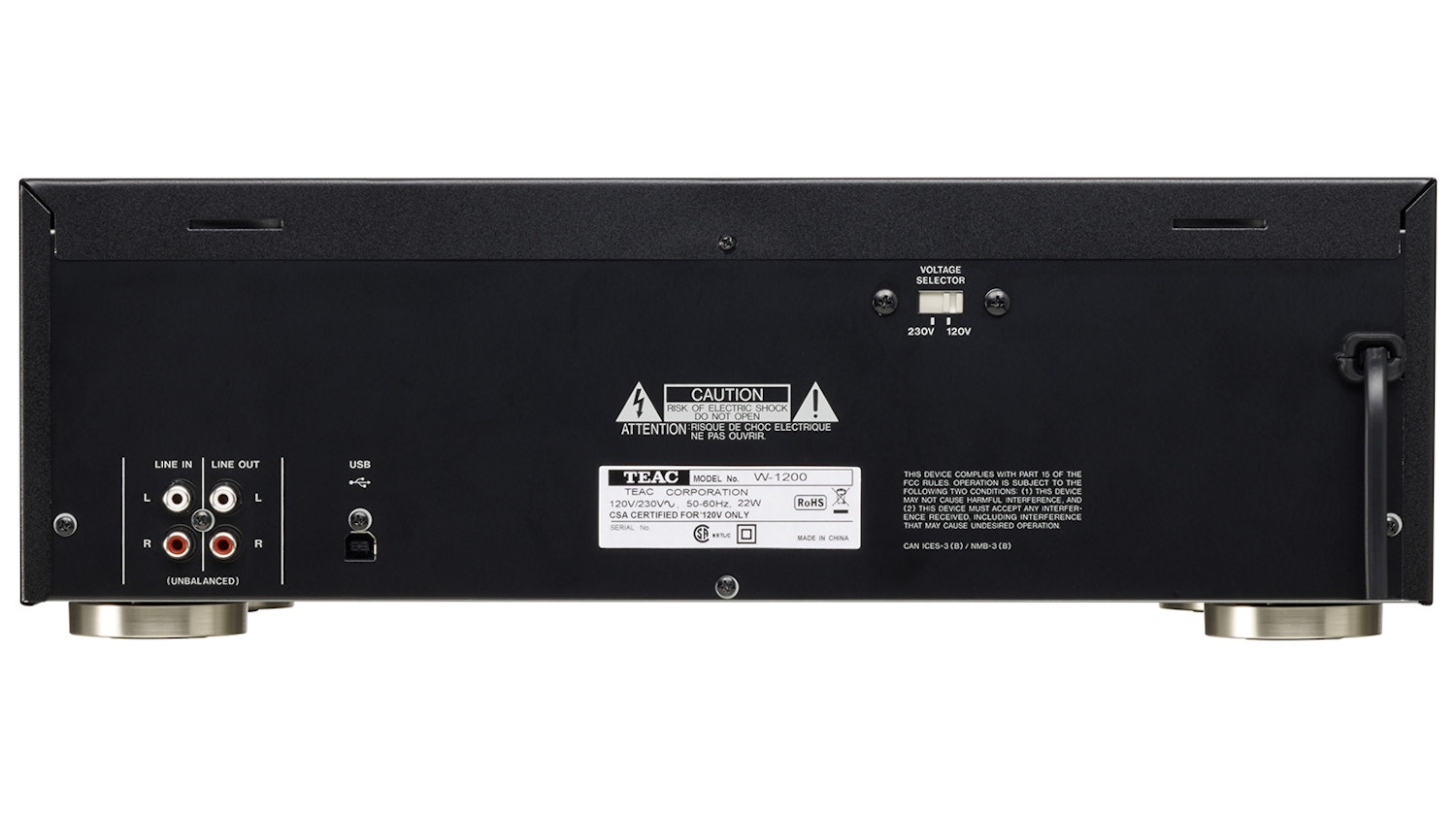 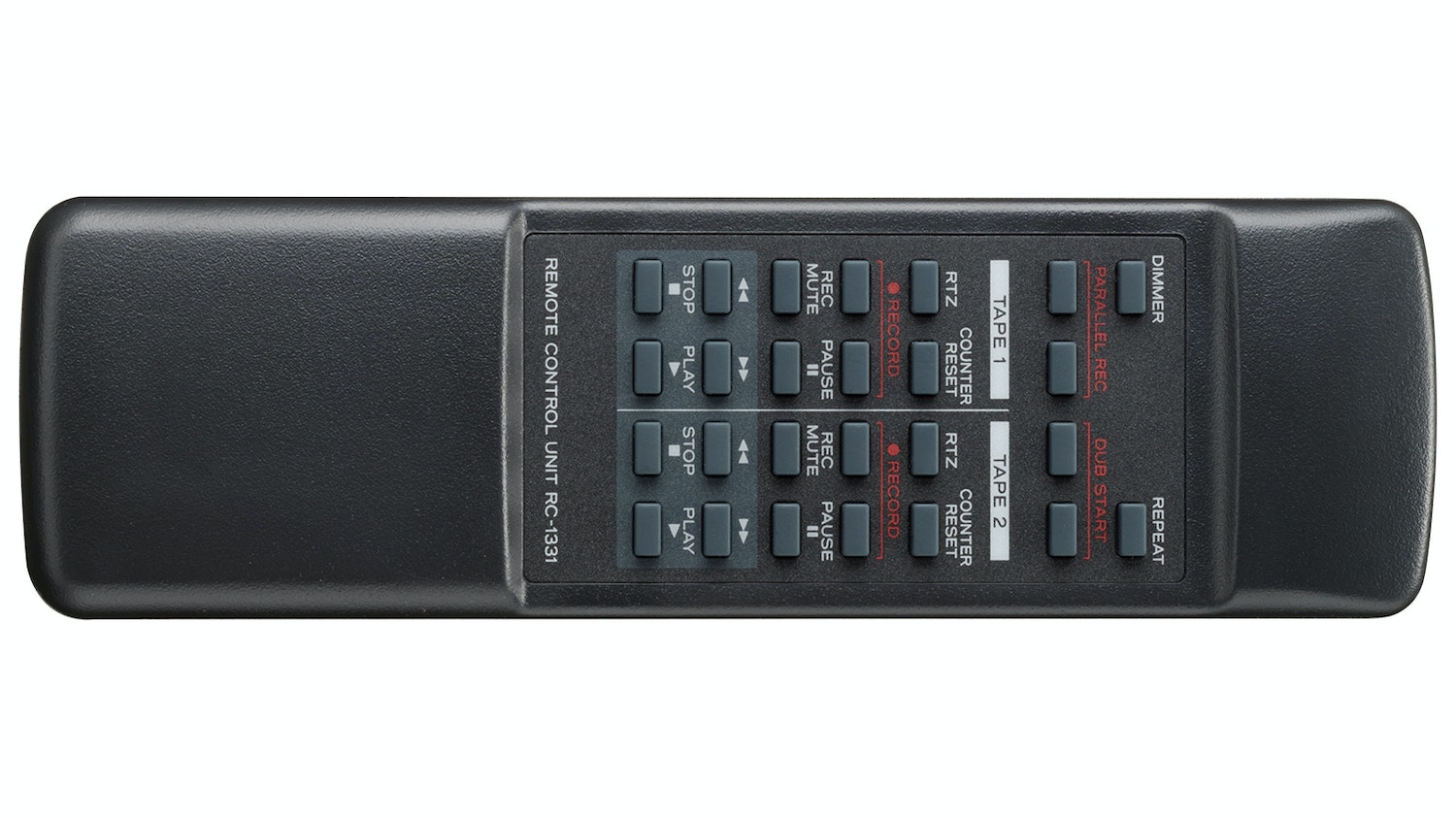 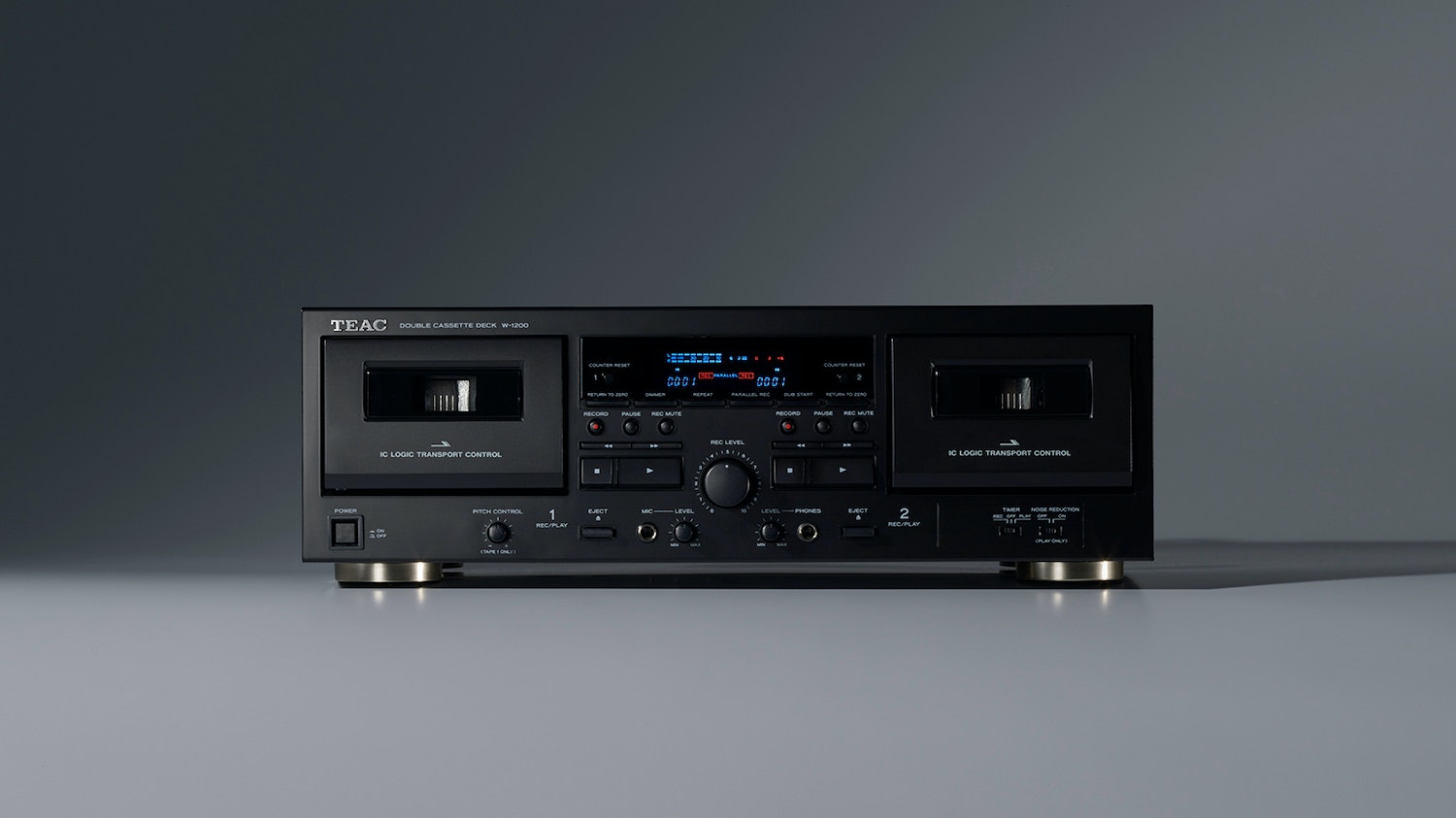 The W-1200 is a double cassette deck featuring two, one-way cassette decks, mic mixing, a USB digital output and other versatile recording features. In recent times, cassette tapes have fascinated those whom have never used them, thanks to their warm, distinctly analogue sound, not to mention the ease of recording and the ability to create 'mix-tapes'.

We set out to create a cassette deck that combined an excellent level of performance with an interface that suits the digital audio era. Not only does the W-1200 offer sound that’s close to the original, it also has a wide range of versatile facilities that allow karaoke singing, the recording of conference minutes, and even the digital recording of analogue cassettes via a computer.

The two cassette decks support recording and playback on each as they have independent drive mechanisms... owners can record on both decks simultaneously to make a pair of identical tapes at the same time. And mic input and mic mixing allow you to practice your Karaoke singing over a cassette tape or an external sound source (via LINE IN).

TEAC's decades of experience in making recording equipment are self-evident in the W-1200, particularly where the noise reduction system is concerned. It allows users to play back legacy cassette tapes originally recorded with Dolby B NR and hear them correctly. Moreover, the pitch control allows you to change playback speed to whatever’s considered appropriate while the level meters provided enable fine-tuning of recording levels. A timer REC/PLAY function is provided to allow use with a third-party audio timer.

Furthermore, the W-1200 can deliver digital audio at CD-quality (up to 48kHz/16-bit PCM) to a computer via a USB cable, allowing digital archiving of your cassette tape library. Once you've digitised them on a computer, you're able to enjoy your old tape-based music library anytime anywhere via a network player, DAP, smartphone or even in your car.

Delivering a high standard of fidelity as a recording device, combined with advanced digital technologies, the W-1200 sets a new standard for double cassette decks in the modern age.

Two simple and reliable one-way cassette mechanisms are employed. During playback (or recording) of TAPE1, users are able to change the cassette tape in TAPE2, preparing it to play (or record) next. Since both of the decks have independent drive sections for control, when one deck is playing (or recording) users are able to operate the other deck (changing tapes, fast forwarding or rewinding,) without affecting the operation of the first deck, ensuring continuity of playback or recording. Both decks support the playback of Normal (Type I), Chrome (Type II), and Metal (Type IV) tapes, while supporting recording on Normal and Chrome-type tapes.

The built-in noise reduction system suppresses the hiss noise that inherent in cassette tape playback. This allows cassette tapes that were recorded using Dolby B NR in the past to be played back with sound quality that is close to the original.

TAPE1 is equipped with a pitch control that changes playback speed (in order to restore the playback sound on old tapes to the original key) by allowing the adjustment of tape speed by ±12%. Moreover, by combining the Pitch control and A-B Repeat play, users are able to make voices easier to understand at reduced tape speeds when transcribing recorded meetings and speeches. Furthermore, both TAPE1 and TAPE2 are equipped with Return-to-Zero (RTZ) functions that make returning to them to their "0000" counter positions easy with the press of a single button.

Parallel Recording makes a pair of identical tapes at the same time on TAPE1 and TAPE2. It is a convenient way to provide someone a copy of a tape right after making a recording.

The dual mode REC MUTE function allows users to erase unnecessary sections and to add spaces (silences) between tracks while recording. During recording or rec-standby, the W-1200 creates a 4-second 'blank' (which is a standard gap) between tracks simply by pressing the REC MUTE button once - press and hold it for more than 4 seconds and you can create a blank as long as you need.

The mic input and mixing function allow users to mix mic sound and tape/aux sound, and to record mixed sound to a cassette tape. By adjusting the mic level, users are able to enjoy Karaoke performance, (useful for announcement-type applications) without an external mixer. Of course, recording the mic sound alone to a cassette tape is also supported. Combine that with the Parallel Recording facility and users can create a pair of identical tapes simultaneously, useful for making conference minutes, for example, one being the 'master' and another for distribution.

* The W-1200 does not support stereo microphones. Please use a monaural microphone.

With just the press of a button, users are able to duplicate cassette tapes, making a backup copy of the original tape. Users are also able to create silences between tracks by pressing the REC MUTE button during dubbing. This also serves as a simple editing system, by allowing the erasing of unwanted sections.

A fluorescent display with high contrast and high brightness is employed to show - in one place - all the information needed to operate the decks, including Left and Right level meters for full-fledged recording plus independent tape counters tor TAPE1 and TAPE2. The dimmer function allows users to adjust the brightness according to the environment.

The built-in A/D converter and a USB digital output on the rear panel allows users to digitally archive their cassette tape libraries, at 48kHz/16-bit CD-quality. The sampling frequency and bit depth are selectable from 8k to 48kHz and 8 or 16 bit, depending on recording quality of the original tape. Once a digital archive is created, users are able to listen to them anytime anywhere with a computer, DAP, smartphone, network player or even in a car.

* Additional digital recording software, such as Audacity or Garage Band is required.

The timer REC/Play ready allows users to record/playback tape when the W-1200 is turned on with a third-party audio timer.

* The W-1200 is not equipped with a built-in timer. Timer REC/Play is NOT available with W-1200 alone. A third-party audio timer is required. Devices that allow timer operation can be connected as sources. For details, check with the manufacturer of the source device.